North American eastern equine encephalitis virus (EEEV) is a virulent pathogen that infects humans with a 30-70% mortality rate. Transmitted by mosquitos, this alphavirus causes a high fever, myalgia (muscle pain), and arthralgia (joint pain). After several days of systemic infection, the involvement of nervous system (in the form of encephalitis) can be signaled by headache, irritability, drowsiness, seizures, and coma. Even after the infection has been resolved, patients can be left with mild to severe mental and physical deficits. 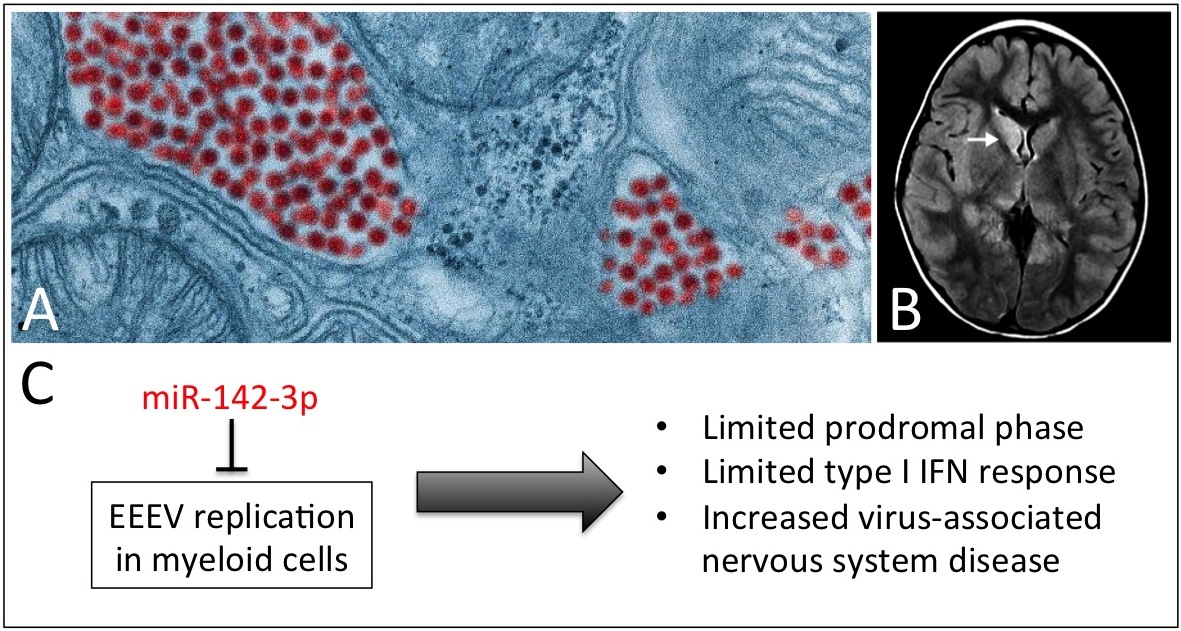 Eastern equine encephalitis virus (EEEV) infection and disease are regulated by miR-142-3p. (A) EEEV particles imaged by transmission electron microscopy (TEM) in the mosquito salivary gland (83,900x). (B) Lesion (indicated by arrow) visualized by magnetic resonance imaging (MRI) in the brain of a pediatric patient infected with EEEV. (C) Consequences of miR-142-3p down-regulation of EEEV replication. Images for A and B acquired from http://en.wikipedia.org/wiki/Eastern_equine_encephalitis_virus (accessed 1 Feb 14).

EEEV infection before the onset of encephalitis is characterized by restricted replication in cells of myeloid origin and a limited type I interferon (IFN) immune response, suggesting that these aspects of infection contribute to EEEV-associated pathogenesis. Using experiments to examine the underlying mechanisms and consequences of limited EEEV infection in myeloid cell populations, investigators at the University of Pittsburgh (Pittsburgh, PA, USA), University of Texas Medical Branch (Galveston, TX, USA), and the Weizmann Institute of Science (Rehovot, Israel) discovered a unique role for cellular microRNA (miRNA) in regulating the replication of this RNA virus and contributing to its pathogenesis (Trobaugh et al., Nature, 2013 Dec 18. doi: 10.1038/nature12869. [Epub ahead of print]).

During infection in the human (and murine) host, wild-type EEEV replicates ineffectively in macrophages and dendritic cells. The authors hypothesized that this restriction was due to the interaction of a cellular miRNA with an EEEV non-translated region (NTR), since (i) miRNAs function by binding specifically complementary sequences in the 3’ NTRs of cellular messenger RNAs and (ii) other viruses, including vesicular stomatitis virus and hepatitis C virus, can be regulated by host miRNA expression. In support of this hypothesis, miRNA prediction algorithms applied to the EEEV 3’ NTR revealed three canonical binding sites, which were conserved across multiple strains of EEEV, for the hematopoietic cell-specific miRNA miR-142-3p.

In a series of in vitro and in vivo experiments, the authors demonstrated that miR-142-3p was indeed responsible for potently restricting EEEV replication specifically in myeloid cells. This mechanism is unique to EEEV, since the replication of the closely related Venezuelan equine encephalitis virus (VEEV) is not similarly affected. Mice infected with recombinant EEEV lacking the three miR-142-3p binding sites were found to have greater levels of virus replication in the lymph nodes, more prominent prodromal (early) disease, significantly higher levels of serum IFN-α/β, and extended survival times. These results suggest that miR-142-3p-mediated restriction of EEEV replication dampens the immune response to infection and paves the way for virus-associated neuropathogenesis.

Interestingly, the binding sites for miR-142-3p appear to be conserved through mechanisms that operate outside the human host. In experiments using mosquito cells, replication of the recombinant virus lacking the miRNA binding sites was significantly reduced compared to the wild-type virus, suggesting the requirement of these sequences for efficient infection in the mosquito vector. As RNA viruses undergo rapid mutation during their replication, this mechanism may positively select for viruses that maintain functional miR-142-3p binding sites in the 3’ NTR.

In yet another example of virus adaptation to host cell defenses, EEEV uses the regulatory activity of a host miRNA to restrict its replication and suppress the innate immune response to infection, thereby promoting virus-associated disease. These studies provide new insights into virus-host cell interactions, and the mechanisms by which viruses are able to circumvent normally effective antiviral immune responses.